Our affair with Boxers began in 1991 when Bob, a veterinarian, was presented with a 3 month old Boxer boy for euthanasia. Instead of going to "the bridge",  Abner  went to the isolation ward where he resided for 2 months until he was "cleared". Subsequently, Abner became my shadow and best friend and ruled for 11 years until claimed by hemangiosarcoma. Thanks Abner, you started it all for us.

Sharing our lives with Abner impelled us to seek out another Boxer, a bitch we decided, that we could show and possibly breed. Our next addition was Trefoil's Starlight - Aries, who, while not the show bitch, proved to be a working girl.  Aries was the first dog I trained for obedience and she was spectacular when she wanted to be. Aries earned two HITs and was first place in all-breed Obedience while showing for her CDX.

We continued our search for the girl of our dreams and in 2001, Halcyon No Regrets, "Greta", joined our family, and produced our first homebred champion, Ch. Pearlisle O So Breathless  (by Ch Shadow's Nairobi, SOM). In her second litter she gave us Ch. Standing-O Notorious (by Ch Standing-O Image X Luckyjade).

One morning I answered a call from Pamela Shaw-George that started out, "I have this really nice boy here, and I need someone to grow him out". Standing-O Jumpin' Jack Flash, CDX,CCD, RN, CGC, Cutter, was now a resident of Pearlisle. He is my working buddy and bed dog and gave us all a thrill when he placed 1st in Open at the ABC, his very first time shown in that class.

It was the following year that Pam called again. This time the conversation was  "Bogie" (Ch Shadow's Nairobi, SOM, LOM) has a litter in Canada; could you grow someone out?"  It was love at first sight when I chose "Sabrette" Luckyjade's Vision X Standing O, DOM, LOM from that litter. Plain or not, she had something special about her that was undeniable. And so, the "little black bitch from Canada" joined the Pearlisle Gang. Shown for a year, Sabrette's show ring triumph was placing 2nd in the Open Brindle Bitch class of 36 entries. Thank you, Betty Mentzer-Cope!  Sabrette proved that her talent however, was in the whelping box. In 2003 she was bred to Ch. Maxl's Golden Boy, SOM ("Conner") and produced a litter of 10; 7 puppies are pointed from that litter and 5 have finished their AKC championships, and include Ch. Pearlisle Overnite In Memphis,RN, CGC, TT, and Ch. Standing-O Ladyluck of Shilo DOM, Ch. Pearlisle Replica of Standing-O CD, and Ch Pearlisle Illusion of Standing-O. She produced an additional champion from her second litter sired by Ch Shadow's Nairobi, SOM - he is BISS Ch Pearlisle N Standing O Risk Factor, SOM. Her third and final litter, sired by Ch. Bix-L's Ricochet to Greyhawk, SOM produced Ch. Pearlisle Standing-O for Bix-L,SOM ("Doc"), who carries the Pearlisle name to Southern California with owners Susan Burnett and Beth Pariseau.  Sabrette is now a Dam of Merit (DOM) with 7 champions, and a Legion of Merit (LOM) with three of her champions also being producers!

A return visit to Canada, and we came home with Ch. Luckyjade's Ooh LaLa, "Vicki", litter sister to our Sabrette and two time Top Twenty contender A/C Ch. Standing-O Image X Luckyjade, "Mac". Vicki finished quickly in Canada and the U.S. and she too has proved her worth in the whelping box.

Bob and I are members of the Connecticut Boxer Club and the American Boxer Club. We continue to train in obedience and to breed sound, stable Boxers for competition and companion. 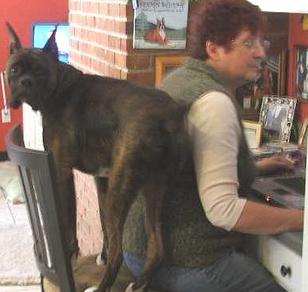